Folder :
Our key ingredients and technologies 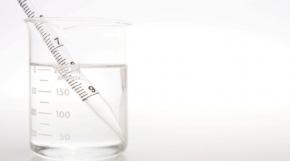 Glycerine was discovered at the end of the 19th century, and is derived from the saponification process, which facilitates the production of soap through fatty substances. Let’s go back to the origins …

The history of glycerine

Glycerine was discovered at the end of the 19th century, and is derived from the saponification process, which facilitates the production of soap through fatty substances. In the beginning, this was achieved through animal fat. It was essentially used to manufacture candles. Today, glycerine is synthesised through animal fat or vegetable oil such as coconut or soy. Since its discovery, the virtues of glycerine no longer need to be proven. It is widely used in various areas of activity:

- in the pharmacy to improve the smoothness of preparations

- in cosmetics, it is a moisturising, emollient and protective agent. It has the property of retaining several times its weight in water, which makes it a must as a moisturising ingredient. Numerous cosmetic and pharmaceutical products contain glycerine, applied with precision in products as varied as soap, shaving foam, toothpaste, mouthwash, hair care and treatment lotions.

What effect does it have on the skin?

Moisturising treatment consists of emollient, humectant and occlusive ingredients that act jointly to improve the moisturisation of the skin. Glycerine combines these qualities and compensates for the functions of natural skin lipids when these are faulty. Finally, it ensures continued moisturisation by forming an occlusive film (barrier) on the epidermis, which limits losses of moisture.

- Smoothness of the skin: Glycerine has surface-active properties that smooth the skin while maintaining a constant level of moisturisation

- Control of flaking: Glycerine tends to regulate flaking of the skin. By moisturising, it limits the formation of small flakes and leaves the superficial layers of the epidermis intact.

- Softening properties: Glycerine moisturises and improves the appearance of the skin by making it very soft.

- Repair of the epidermis: Glycerine plays an important role in the skin repair process, by promoting the synthesis of lipids in the epidermis.

Glycerine is one of the essential ingredients of the Neutrogena NORWEGIAN FORMULA® range of products that are popular due to their efficiency in caring for dry, very dry and sensitive skin. The glycerine used in Neutrogena® treatments is exclusively derived from vegetable oil. Hand, foot, body or lip care: all are enriched with glycerine, in order to ensure optimal moisturisation of the skin and vitality, tone and natural softness.

Back to top of section

You should read this ...